"I Feel everyone should do it, may it be young or old,
even if you are dying after 5 days, do this...
you will live your 5 days rather than waiting to die."

I am a Rifle Shooter by profession. I started my rifle shooting in 9th std. I love to collect information about Guns. My dream is to make Modern Weapons for my Country. In the start of my Rifle Shooting career I did good in my Rifle Shooting and my Sir was impressed by my Shooting.

After completing my SSC exams I did Alive and Fearless under the guidance of Sir Murtaza Badri. He helped me in my transformation process. I was very much clear in what I want to do in my life. With the help of Murtaza Badri a great confidence was build in me.

My shooting Sir was impressed seeing the change in me and gave me an opportunity to teach Rifle Shooting in my School. First I was shocked but Sir motivated me that you can do it. My parents were very happy by listening this. Because at just age of 16th I was going to do a Job and handle responsibility.

This course helped me to remove the fear of talking with strangers and to express my self. Currently, a competition was held in that my student won Gold medal U/17 and U/14. Alive and Fearless has helped me a lot Thank You Very Much.

From being skeptical about the course,
to having fun, enjoying the course & personal growth .
"If you apply it, it has a major impact on your life"
-- A&F Graduate, Aug 2015, Mumbai --

If you are someone who is thinking
what will be taught that I have not learned till now, watch this.
"This course is definitely an eye opener"
-- A&F Graduate, Dec 2013, Mumbai --

Since school days I was very passionate about my career in teaching. I had stage fear and was not able to speak in front of the crowd and this fear was an obstacle in pursuing my career. I had given so many interviews but I was rejected due to my stage fear and confidence. Then I had to find solution to my problem and somehow I got to know about this Alive and Fearless Intensive workshop and I registered there with the positive feeling of Life transformation.

The Alive & Fearless Intensive workshop was truly amazing. I learnt so many things with lots of activities. The activities were like fun dose in the workshop. And it created an excitement for learning. It really affected my life. And from then I declared myself as POSITIVE, SMART & FEARLESS person. And I am working on it. Since then I gave several interviews being POSITIVE, SMART & FEARLESS with no fear of failure with full confidence and positivity and I was selected in ORCHIDS –THE INTERNATIONAL SCHOOL. Which was the first step towards success.

I always remember the words which Murtaza sir used to say “IF YOU FACE YOUR FEAR IT WILL DISAPPEAR”.

Got the different perspective on how to think,
which helps you in all departments of life.
"Murtaza is very genuine person, he speaks from heart "
-- A&F Graduate, April 2014, Mumbai --

Thought was already living Happy, as ignorance is bliss,
Did not know what's possible out there to achieve
"It's definitely changing my life"
-- A&F Graduate, Aug 2015, Mumbai --

Its been almost 5 years since I've attended Alive & Fearless. I was initially a lost chap, always unhappy and ungrateful, not knowing what to do with my life.

In my eyes, you are nothing but a savior. You showed me a path towards development. You gave me the desire to grow & learn. You gave me faith & courage to dream bigger and you gave me hope to keep going.

Napoleon Hill used to speak about how he would have a counsel with all his role models in his mind. I used to do the same. But keeping you as my role model.

There was a poem I had written a long time ago. It goes like this-
"Be our lighthouse and show me the way when I'm too far out,
too far involved battling my own demons,too vain to shout
out for help when I'm lost in oblivion,
where my minds dark minions
speak directly to my heart
which does not pay heed,
to the opinions I impart"

You were that lighthouse when we were lost at sea.

"Not a commercial program. It has touched my life"

A Business owner sharing how the course helped
him and his employees.
"Helped me in my personal & professional life"
-- A&F Graduate, May 2014, Dubai --

Engineering student who thought all this was 'stupidity',
and after course how it was a 'life changer'.
"Will help you face life & challenges. I am able to understand people"
-- A&F Graduate, Aug 2015, Mumbai --

After years of reading books by great masters... I felt inspired but not motivated enough to bring about change in some areas of my life. It is at Alive and Fearless weekend Intensive Course by Murtaza Badri, I realized precisely why it was not happening and what needed to be done. The whole program is so well designed that transformation is inevitable. I am feeling charged and motivated. Best investment of time and money on a course. A big Thank You to Murtaza. You are Awesome.you will live your 5 days rather than waiting to die."

20 years ago, I lost a family member in a road accident and two years later another family member. I was so gripped with fear that I stopped driving a car. (I was not even present at the accident site!). After second accident, I cut my driving licence into pieces so that I am never tempted to drive.

All these years even though the need to drive was there somehow I could not bring myself to drive.

After years of reading books by great masters... I felt inspired but not motivated enough to bring about change in some areas of my life.

But after three days of Alive and Fearless Intensive workshop, just felt that I needed to move on and I went and enrolled at Driving School for fresh licence.

Finally got my driving licence and now I can drive in heavy traffic and that too without any anxiety.
Thank You!

Believed could not sleep before 2:00 am. Started sleeping earlier,
Now Much More fresh & happy.
"First day itself I could see the difference"
-- A&F Graduate, Aug 2015, Mumbai --

I Had completely lost courage and confidence after my pregnancy.. I thought that my career has just gone for a toss... It was a constant battle everyday with me and my soul whether to do justice to my motherhood or to deal with the guilt of putting a stop to my career, specially in the country (Singapore) where I live women are highly career oriented even after childbirth.

I revised my Alive & Fearless from my booklet which luckily we have kept it handy with us even after years (5 years), picked my broken self up,did few reading, got in touch with the latest trends in my career and came to know that therapist offer online counselling services. Hence made an attempt and started messaging everyone about me offering the same. Here I'm very happy today. Started with counselling clients and looking for many more...

I am alive and I'm fearless
Thank you Murtaza Badri for the constant Inspiration..

Helped her get more focused in life &
discover her true-self.
"My relationship with my husband & parents have definitely improved"
-- A&F Graduate, Dec 2012, Mumbai --

A faculty in parenting sharing how the course is
different from many of the motivational program she attended.
"If you have goals, then this program is for you"
-- A&F Graduate, April 2014, Mumbai --

"I was living a 'Dead' life which is now healthy & alive"

Student getting over self-confidence & self-esteem issues,
overcoming fear during the course itself.
"Really very thankful to Mr.Badri for giving this opportunity"
-- A&F Graduate, April 2014, Mumbai --

Got Clarity regarding his Career & Future.
Helped him Overcome Anger, Stress and Fight Issues.
"Suggest to all youth, to have a bright future"
-- A&F Graduate, Aug 2015, Mumbai --

Absolute Support!! Attended many motivational seminars, heard a lot of CD's. So knowledge was in abundance, but no proper way of how to apply it. In Alive & Fearless Intensive, Badri Sir really ensures the commitment he gives on Day 1 that he'll do anything to see the transformation, and YES!!! he does it.

Thought didn't need any personal development, life is going good.
How the course helped her take control of her entire life.
"I learn't how to get over things, I look forward to everyday"
-- A&F Graduate, Aug 2015, Mumbai --

"I had issues with anger and sensitivity..."

Sharing his experience before entering the training,
insights during the training and after the rod bending activity.
"It changed the way for me to look into the world"
-- A&F Graduate, May 2013, Dubai --

Came to explore things and got the answers to make
relationships and career smooth.
"I got tools & solution which I can apply, so things become smooth"
-- A&F Graduate, Oct 2015, Mumbai --

"Once you attend it, you will feel the worth of it." 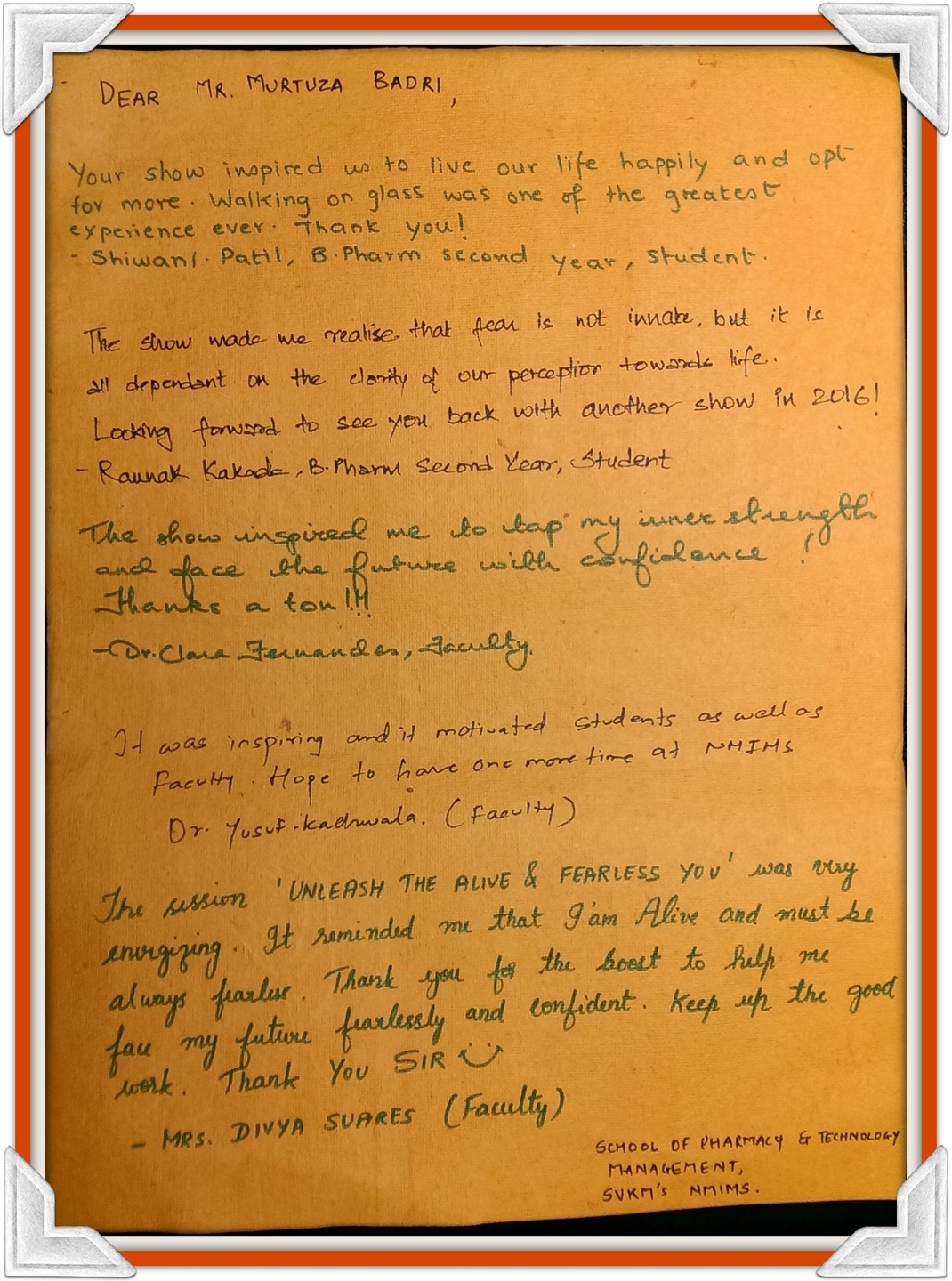 Amazing program. It has changed my life. You will never come to know what life is actually about until you attend this. Too good!"

"This program helped me a lot to get open up in front of people, Actually express my emotions and get over my Fears. I feel an energy, confidence and happiness. And I feel complete from within. Thank you so so so-much."

"A program that not only takes you away from your daily life but teaches you have to improve your way of living. It has given me clarity in thoughts and made me a person I always wanted to be, but never had the courage to do it. "

"Alive & Fearless is the true place where you truly realize the turning point of your life. Its a complete package of high performance course "

"I came for the training to find out tools and techniques to make my life better. After the training, I discovered what and how to live a better life. A perfect gift for myself"

"Its been a very great learning experience. To realize and things we were doing all along. It has taught me to take responsibility for all that is undesirable in my life & pledge my  efforts to personal transformation."

"The course was really good, it influenced me, it changed my attitude towards life. First I was fearing to speak up in public, now it just makes me comfortable to speak out. It made my life free from tension, fears and now I can live my life more joyful and peaceful"

"One must really come experience BLTA's Alive & Fearless. It is regaining energy channel to invest, collaborate & establish the ambitions in reality with true behaviour."

"Dear Murtazabhai, THANK YOU very much for giving me the opportunity to attend your program. Before attending the course I was very much heavy at heart and really fearful to talk to people even at the age of 34, but after attending the 3 day course, I have found a drastic change in myself.....have become much more clear to what needs to be done and definitely planning and taking massive actions....."

"This A&F program is awesomely good. I have learnt a billion things. Made so many good true friends. Got more closer to my family. I have already started to transform. Emotions are poured out. Must must and must attend this workshop. If not attended, then nothing achieved in life. It's like this "must" do it thing without which you life is not completed. Like the four wheels of a car. If one broken,  you are not able to drive. A&F is one of the wheel of your car. Thanks You..." 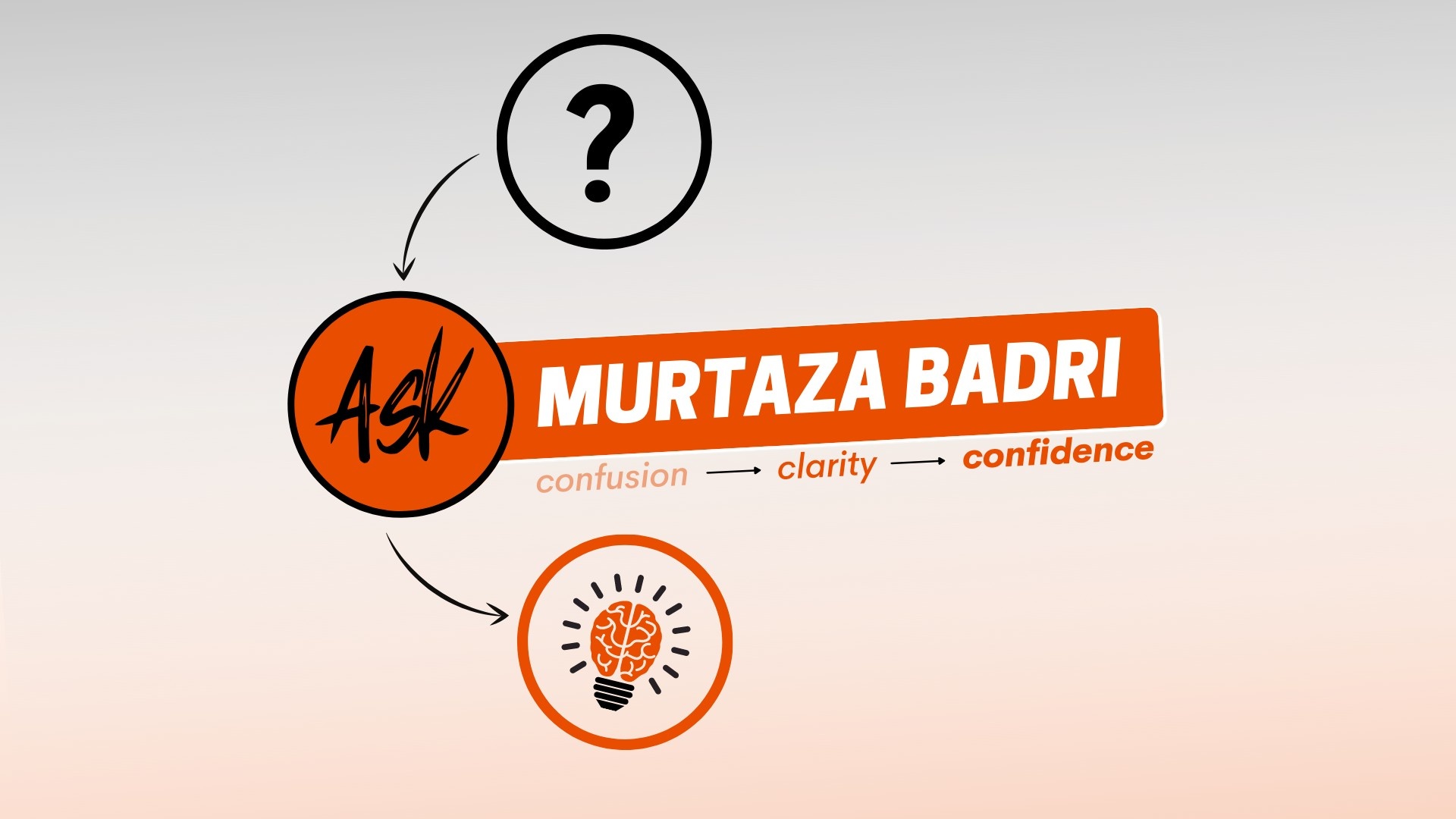